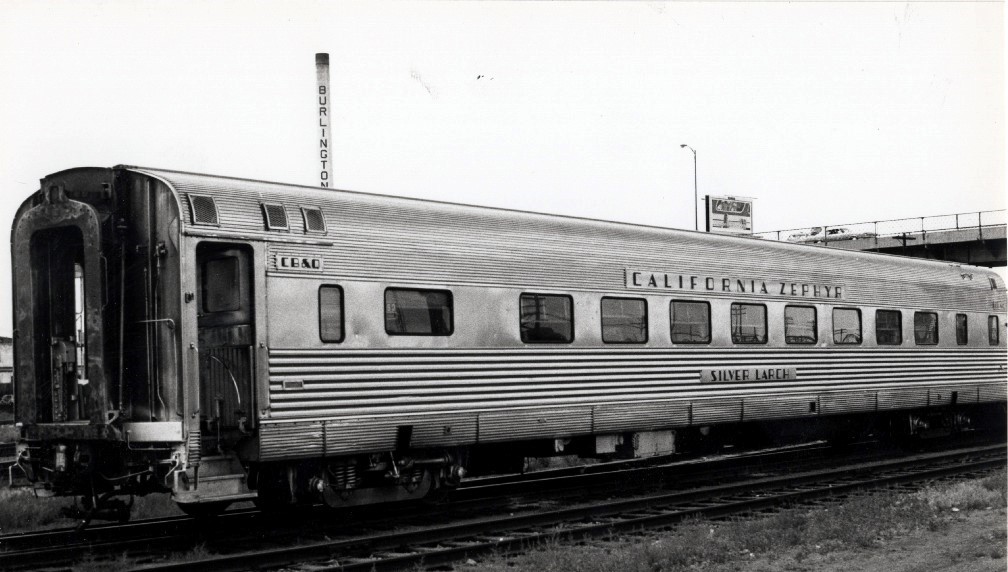 Built by the Budd Company, Silver Larch started life in 1948 as a 16 Section Sleeper on the California Zephyr, running between Chicago, Il. and Oakland, Ca. The California Zephyr operated over the Chicago, Burlington & Quincy, Denver & Rio Grande Western and Western Pacific Railroads. Carrying the number 401, the car was ‘owned’ by the CB&Q, though it ran over the three railroads on it’s cross-country route. Unfortunately, demand for Sectional Sleepers waned and in 1963 Silver Larch was converted to a 48-seat coach. During the conversion it was also renumbered 4743.

Silver Larch became part of the Amtrak “Heritage” fleet when it took over inter-city rail travel in 1972. The car still had its side skirting through the 1970’s but unfortunately Amtrak removed the skirts for convenient maintenance access under the car. Silver Larch was one of the last coaches withdrawn from their “Heritage” fleet as newer equipment was brought in.

When the St. Louis chapter of the National Railway Historical Society acquired Silver Larch from Amtrak, it was in rough condition. Years of constant Amtrak service had taken their toll on the car and much work was needed on it. After the work was completed, Silver Larch was released for service in early 2002 and made its first revenue runs on excursions in Missouri. It has since operated on several other excursion trains and again, after many years of service, is in dire need of repair.

Now in private hands, Silver Larch is currently located on the St. Marys Railroad in St. Marys, Ga. where it awaits restoration by the Florida-Georgia Steam Heritage Museum for operation on their Georgia Coastal Railway heritage train.