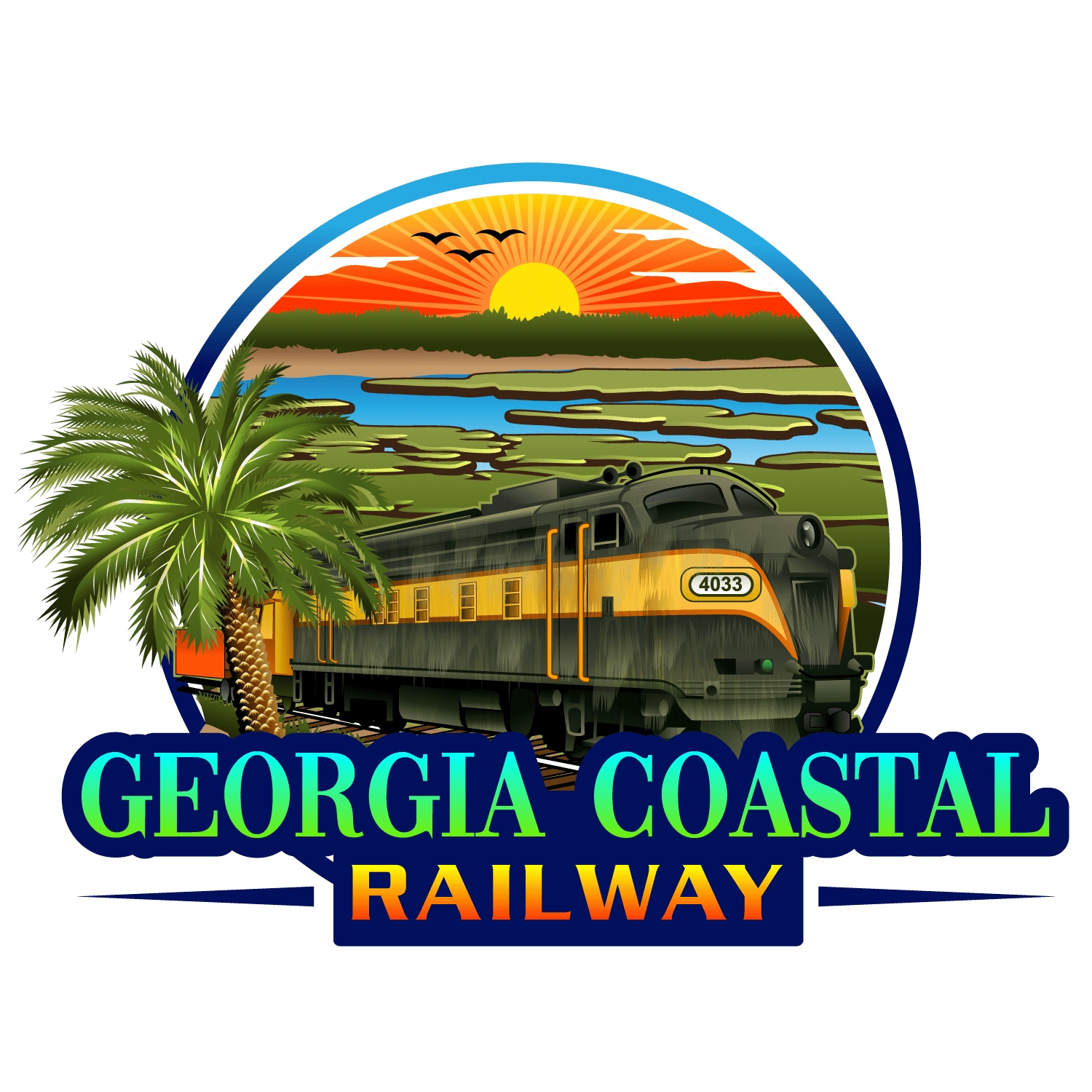 Welcome to the Georgia Coastal Railway at Kingsland Station

Menu
EXCURSIONS
All aboard! Immerse yourself in history, fun, and adventure as you travel the rails on one of America’s oldest privately owned shortline railroads. Your experience begins as you board the train at Kingsland Station. Relax and enjoy watching vignettes of America pass by as the train rambles through neighborhoods, Georgia marshlands, woodlands, commercial districts and even a working rail yard. The Georgia Coastal Railway welcomes you!
Click Here
MURDER MYSTERY EXPRESS
Who Done it? Hop onboard and be immersed in a fantasy world of suspects and detectives. Everyone will get a chance to solve the crime !
Click Here
GREAT GATSBY Getaway
Experience the 1920's era gangster train while sipping pre-prohibition inspired cocktails with live entertainment.
Click Here
PIZZA EXPRESS
What’s better than a train ride? A train ride with PIZZA of course!
Click Here
TEAM BUILDING Training on a Train
Experience a unique training session on the train! Engage your own mind or your staff with off site training on the train
Click Here
SURVIVOR TRAIN
Saturday, October 8th & 15th at 6pm and 8pm Be prepared to Hide because you can't run away from the zombie outbreak
Click Here
FREEDOM FLYER
Celebrate America with a train ride and an All American HOT DOG! One hour train ride includes 2 Ball Park Style Hot Dogs, Chips and soft drink or water.
Click Here
KINGSLAND STATION CONCERT
LIVE Entertainment at Kingsland Station
GET Tickets
STARS ON TRACK!
Catch a rising star and be entertained by the sister duo, Iris Andie and Violette Lani on the May 28 train.
Click Here
Previous
Next

All aboard! Immerse yourself in history, fun, and adventure as you travel the rails on one of America’s oldest privately owned shortline railroads. Your experience begins as you board the train at Kingsland Station just 2 miles west of I-95.  Be entertained on board during one of our themed rides or choose to sit back and enjoy watching real time snapshots of America pass by. Travel through neighborhoods, Georgia marshlands, commercial districts and even a working rail yard. The Georgia Coastal Railway welcomes you!

Depart from and arrive at
KINGSLAND STATION

All trains except Special event parking shuttles run round trip from KINGSLAND STATION. We’re located at 440 S. Lee St in Kingsland, Ga just 2 miles west of I-95.  The property was built in 1915 as a sawmill factory and most recently served as a church.  Click HERE to watch our progress as we transform the space into a fabulous event venue.

Where to find us

Hop on board and journey through science fiction past, present & future. This ticket includes a complimentary walk-through of the amazing starship world of Neutral Zone Studios! ALL SALES ARE FINAL! No refunds. Train runs rain or shine! TICKET OFFICE (904) 370-3744
Get Info & Tickets
Time Travel

All aboard the Murder Mystery Express as we travel by rail back-in-time to the prohibition era where beautiful flappers and illegal antics set the stage for murder. Can you solve the mystery of the murder of Goldie Star? Wear your finest roaring 20s and prohibition era fashions and get into the spirit. ALL SALES ARE FINAL! No refunds. Train runs rain or shine! TICKET OFFICE (904) 370-3744
Get Info & Tickets
The MURDER of GOLDIE STAR

What’s better than a train ride? A train ride with PIZZA of course! "Nothing could be finer than pizza in the diner!" Ride the Pizza Express and get your choice of a 16″ Cheese Pizza or a 16″ Pepperoni Pizza for the table. (soft drink or water included. ALL SALES ARE FINAL! No refunds. Train runs rain or shine! TICKET OFFICE (904) 370-3744
Get INFO & Tickets
YUM!

Please arrive 15 minutes prior to departure time.
Masks are strongly encouraged. ALL SALES ARE FINAL! No refunds. Train runs rain or shine!

Listen and LAUGH to funny observations from seasoned as well as up and coming stand up comedians on our newest train.
See the line up

Enjoy live entertainment by up-and-coming talent on select train rides throughout the year.
See who's up next
Catch a Rising Star

Celebrate the holidays on a train ride with SANTA! Choose our climate controlled cars or sit with your face in the breeze on our Open Air car. ALL SALES ARE FINAL! No refunds. Train runs rain or shine! TICKET OFFICE (904) 370-3744
Get Info & Tickets
Ho Ho Ho !

Travel back in time on our open air train car to experience a recreation of a small town where trouble is a brewing. This ride is sure to entertain the entire family. ALL SALES ARE FINAL! No refunds. Train runs rain or shine! TICKET OFFICE (904) 370-3744
Get Info & Tickets
Shoot em up Cowboy!

Get ready with your best flapper and dapper attire and climb aboard . This is your invitation to the underground society. Best dressed couple will wine FREE tickets to the Murder Mystery Express. *Boarding begins 15 minutes prior to departure time. ALL SALES ARE FINAL! No refunds. Train runs rain or shine! TICKET OFFICE (904) 370-3744
Coming Soon
COMING SOON!

Our fun, open-air rail cars are used on special excursions like the Wild West Train Ride, the Survivors Train (Zombie Train), Meet the Monsters, Cottontail Special, National Train Day, Stars on Track, and the Santa Special. They also serve as parking shuttles between the City of Kingsland Visitors Center and downtown Kingsland during special events.  These rail cars are not equipped with restroom facilities.  Weather can affect your comfort during excursions so come prepared and wear comfortable clothing.

Due to the historic nature of our railcars, pursuant to FRA regulations, our railcars are ADA inaccessible. We aplogize for any inconvenience.

(1) Exception
To the extent that compliance with subsection (a)(2)(C) or (a)(7) of this section would significantly alter the historic or antiquated character of a historical or antiquated rail passenger car, or a rail station served exclusively by such cars, or would result in violation of any rule, regulation, standard, or order issued by the Secretary of Transportation under the Federal Railroad Safety Act of 1970, such compliance shall not be required.

(2) Definition
As used in this subsection, the term “historical or antiquated rail passenger car” means a rail passenger car
(A) which is not less than 30 years old at the time of its use for transporting individuals;
(B) the manufacturer of which is no longer in the business of manufacturing rail passenger cars; and
(C) which
(i) has a consequential association with events or persons significant to the past; or
(ii) embodies, or is being restored to embody, the distinctive characteristics of a type of rail passenger car used in the past, or to represent a time period which has passed.

Be aware that by riding our train or entering our venues, you consent to your voice, name, and/or likeness being used, without compensation, in films and tapes for exploitation in any and all media, whether now known or hereafter devised, for eternity, and you release Florida – Georgia Railway Heritage Museum, Inc. , its successors, assigns and licensees from any liability whatsoever of any nature.