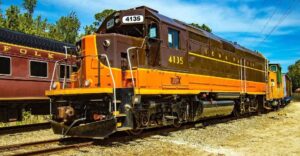 Built in August 1967 as a GP-40 model by the Electro Motive Division of General Motors for the New York Central Railroad (NYC) and numbered 3070. It became Penn Central (PC) 3070 after the 1967 merger of the New York Central with the Pennsylvania Railroad (PRR). With the Penn Central bankruptcy and subsequent integration into Conrail in 1976, the engine kept it’s original number until being sold in 1990.

In 1990, it was rebuilt by Morrison-Knudson into a GP40FH-2 for New Jersey Transit (NJT) commuter train service and renumbered 4135. It was equipped with head end power (HEP) and utilized a cowl body from Burlington Northern Railway (BN) F-45 #6636. In 2011 it was leased briefly from NJT by Agence Métropolitaine de Transport (AMT) to provide commuter service around Montreal, Quebec. It was returned to NJT in 2013 and placed into storage until it was sold to Iowa Pacific Holdings (IPH) later that year.

After purchase, IPH painted the engine in it’s Illinois Central Railroad (IC) inspired brown and orange scheme and kept the number 4135. IPH assigned the engine to it’s Colorado based subsidiary San Luis & Rio Grande Railroad (SLRG). Though assigned to the SLRG, the engine never ran there. Rather, it served other IPH operations in the east. Starting in 2015, the engine led the Chicago to Indianapolis “Hoosier State” until the train transitioned to Amtrak equipment in early 2017. Later that spring, IPH sent 4135 to it’s subsidiary Saratoga & North Creek Railway(SNC) where it ran until that railroad ceased operations in May 2018.

Christmas 2018 saw 4135 running on the Hoosier Southern Railroad (HOS) Polar Express train in Tell City, Indiana. In early 2019 the engine was placed into storage. It was purchased in 2021 by a private individual as part of IPH’s ongoing bankruptcy liquidation. Now in private hands and lettered BUGX 4135, the engine is currently located on the St. Marys Railroad in St. Marys, Ga. where it awaits repair by the Florida-Georgia Steam Heritage Museum for operation on their Georgia Coastal Railway heritage train.